Crosses can be found just about anywhere — a charm on a necklace, printed on a T-shirt, on the Altar, hanging on a wall. Such a commonplace “item” today for us, it may no longer convey the brutality of what Christ truly bore for our sins. However today presents beautiful opportunities to us: to remember, to meditate, to mourn, to be grateful. For this is the day, this is the day when Christ laid down his life for ours.

We reflect on the Lord’s Passion to honor the ultimate sacrifice he paid for our sins, and so that we too can experience the glory of His Resurrection. Our prayer is that these gathered reflections will bring you deeper into the mystery of Good Friday and the knowledge of the ransom paid for our sins. We have also added a FREE Good Friday Meditation download for personal use in our shop. It is a beautiful reflection on the sufferings and love of Christ, written by teammate Tammi McCarthy. 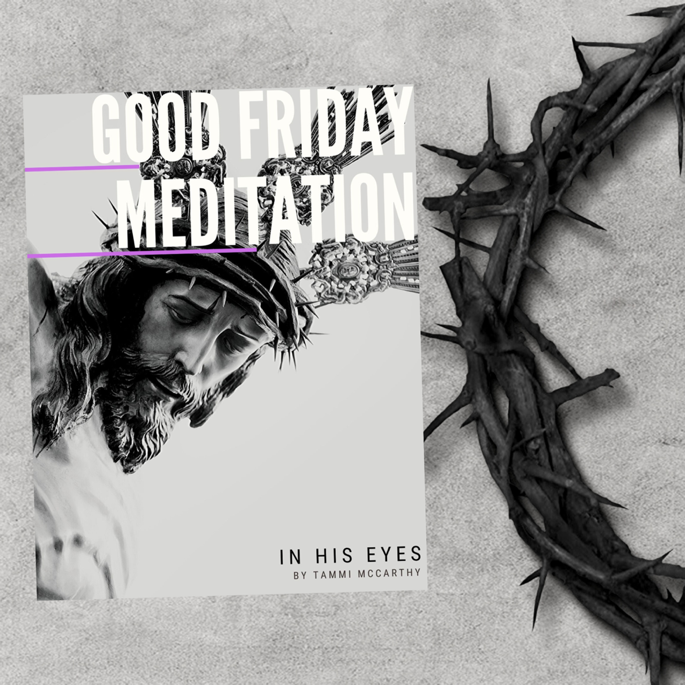 Enter more deeply into the Passion of Christ with this Good Friday Meditation. This reflection, written by contributor Tammi McCarthy, guides readers through the pain and suffering of the crucifixion as well as the love and hope of Christ’s sacrifice.

Simply download your meditation, print, and use on Good Friday or anytime that you need to reflect on Christ’s sacrificial love.

(Word of Caution: Some of the following material is very descriptive of the violent acts Christ endured.)

By this point in time, our Lord has already been betrayed by his friend, arrested, deserted by all his followers, examined by the Roman Governor, wrongly condemned to death on a Cross, and denied by Peter. The first part of His suffering, the agony, was extreme mental suffering. Archbishop Fulton Sheen said that we cannot compare how we experience suffering to that of Christ, since in addition to having human intelligence, He also had Divine intelligence. Also, His “physical organism” was as perfect as any could be, so “it was much more sensitive to pain than our human nature, which has been calloused by crude emotions and evil experiences.”

Now we come to the second part of His suffering – the torture of both His body and soul, which ended with His death. Combined, these sufferings constituted the “baptism wherewith I am to be baptized” (Lk 12:50).

The gruesome details of the scourging were left out in John’s Gospel. Another physician, Dr. Pierre Barbet, also a devout Catholic, wrote a riveting book called A Doctor at Calvary. In it, he “relied heavily on his close analysis of the Holy Shroud of Turin to recreate every stage of the Passion with heart-rending precision and detail.”

On the scourging, this is what the Dr. Barbet relays: Jesus was bound to a column, probably with his hands above his head. They used a crude instrument, the flagrum, which was comprised of a short handle with several long, thick thongs attached (pictured right). Near the end of each thong, ‘tali’ were inserted, which were balls of lead or small sheep bones. This tortuous device was designed to not only cut the skin with the thongs, but also dig deep wounds with the tali. Not one, but two executioners – one on each side – carried out the scourging. On the Shroud of Turin, there are more then 100, perhaps 120, marks from the shoulders to the lower parts of the legs. If there were two thongs, this means that Jesus received about 60 strokes apart from those which have no mark.

The Crowning of Thorns

St. Alphonsus de Liguori wrote The Passion of Jesus Christ. In it, he described the sufferings derived from the crown of thorns placed upon Jesus’ head. The Shroud of Turin shows evidence that it covered the whole head, shaped as a helmet rather than a wreath. This would have been driven against His head by blows with a stick. Considering the head is the most sensitive part of the body – with all the nerves and sensations of the body diverging from it – our Lord suffered extreme pain in this torture that lasted up until his death. What else of the Crown of Thorns has been revealed to other Saints?

Carrying of the Cross

When presented with the Cross, what reaction did Our Lord have? St. Thomas of Villanova said:

But Jesus did not wait for the executioner to place the cross on his shoulders. Of his own accord he stretched out his hands and eagerly laid hold of it and placed it on his wounded shoulders. Come, he says, come, beloved cross! It is now 33 years that I have been sighing and searching for you. I embrace you, I clasp you to my heart, for you are the altar on which I shall sacrifice my life out of love for my flock.

Dr. Barbet recounts what it meant when “Jesus carried his cross.” He carried the horizontal part of the cross, the patibulum, which weighed approximately 125 lbs. for 600 yards from the Praetorium to Golgotha. It was carried against the nape of the neck, with arms stretched out and bound to it so that He could give no resistance. The marks on the Shroud can only be explained by the scraping of the beam against the back, which was more poignant during each of His falls.

Nailing to the Cross

The cloth Jesus had worn was stripped away, also tearing open the wounds that had firmly been stuck to it. Although the Scripture’s literal translation were that his hands were nailed to the cross, the dragging of the body would have probably torn the skin. So, the 1/3″ thick, long, square yet pointed nails were likely driven in the middle of each wrist.

There was only one hole from the nail wound in the feet. It must have been driven in through the back of the feet, a much easier passage.

Words from the Cross

Our Lord spoke only seven times from the Cross, so they are appropriately called His Seven Last Words. The one that had caused me to be perplexed was what he cried out in the 9th hour. “My God, my God, why hast Thou forsaken me?” – Mt. 27:46, Mk. 15:34.

I used to wonder, “How could the Son of God, the second person of the Trinity, have felt abandoned by His Father?” It was more than just repeating the Psalm of David, written a thousand years before, prophetically referring to Him (Psalm 21:13-19). Archbishop Sheen explained:

Piercing of the Side

“But one of the soldiers pierced his side with a spear, and at once there came out blood and water.” – Jn 19:34.

“The blow of the lance which was given to the right side reached the right auricle of the heart, perforating the pericardium – it was therefore not just a wound to the side, but one in his heart,” Dr. Barbet described.

The blood came from the heart, the what appeared as water was the pericardial fluid.

Death on the Cross

The specific cause of Christ’s death was asphyxia, or suffocation. The positioning of the body on the cross made it hardly possible to breathe: The whole weight of the body dragged on his hands above him, and with his arms raised, it created a relative immobility of the sides which greatly hindered exhaling.

Dr. Barbet likened what happened within His body — the contracting of the muscles to rigidity and the lungs filling with air which could not escape — to strangulation. The only way He could have escaped for a few moments from the battle for air was to try and lift His body upwards, using His feet for support.

In God’s mercy, the story does not end here.

“But he was wounded for our transgressions; he was crushed for our iniquities; upon him was the chastisement that brought us peace, and with his stripes we are healed.” – Is 53:5.

As we await the celebration of His Resurrection still, we will leave you to continue to meditate on the price He paid for you. Pick up your Good Friday Meditation here. A blessed Good Friday to you, friend. 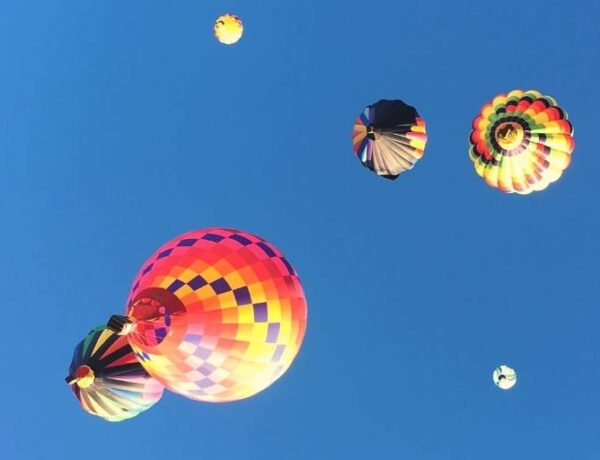 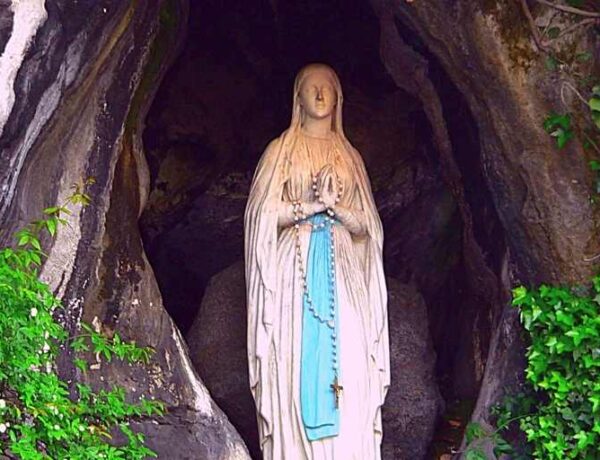 Meeting Mary in a Dream 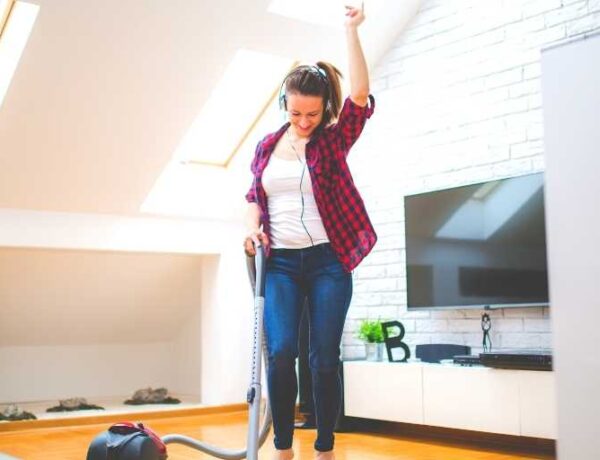 Every Vocation is Worthwhile

The Impact of Weekly Adoration

Living in Resurrection through a Pandemic